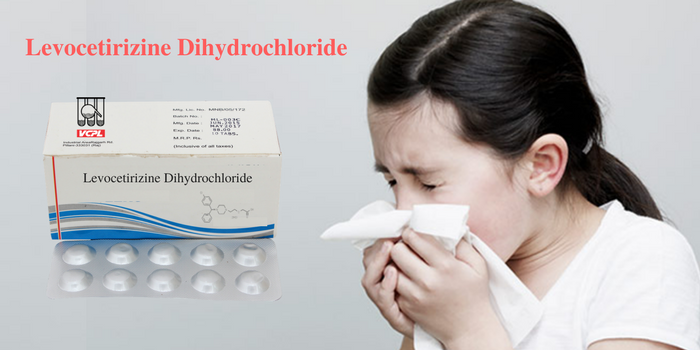 Levocetirizine Dihydrochloride is an antihistamine that is highly effective in curing allergic symptoms like a runny nose, watery eyes, sneezing, and itching eyes or nose. It is also known to relieve hives and itching in a great way. It also cures symptoms associated with the seasonal allergic rhinitis in adults as well as in children above 2 years of age. It is observed that apart from the needed effects, it also demonstrates other reactions that are not indicated. However, all the possible adverse effects are not applicable but might need medical attention if occurred.

Importance of the Compound in a Medicine

When a body suffers from some kind of allergy, it produces a natural substance called histamine. Levocetirizine makes sure the production of histamine is blocked giving extreme relief to the body. It doesn’t prevent hives or cure a severe allergic reaction such as anaphylaxis. However, it has proven to cure various allergies that can raise serious medical emergencies. Some of the most common conditions that are treated in an effective way with Levocetirizine Dihydrochloride are:

Immediate attention of a doctor is needed if any of the following symptoms occur:

Some of the symptoms of Levocetirizine occur with a minimum effect that doesn’t demand any medical attention. It usually goes away with time as the body adjusts to the drug. Even some of the physical practitioners suggest ways to resist the most common symptoms from occurring. Some of the most common side effects of the medicines with this compound are muscle ache, headache, drowsiness or sleepiness, sore throat, stuffy nose, etc.

Some of the less common symptoms are congestion, diarrhea, earache, hoarseness, voice changes, swollen glands in the neck, etc.

Precautions to Be Taken During the Consumption of the Medicine

If a doctor prescribes an antihistamine medicine for the specific ailments, then the past history of the allergic reactions against Cetirizine or hydroxyzine must be informed to avoid any side-effects. This product might contain various inactive components which may trigger several unavoidable adverse effects. Therefore, the doctor must be informed about any medical exceptions before the intake of this medicine, especially if someone is suffering or has suffered from a kidney disease, enlarged prostate, or faced difficulty in urinating. Apart from the basic precautions, consumption of alcohol or marijuana should be strictly prohibited to make sure it doesn’t react with the medicine, producing harmful symptoms. It is also suggested to stay away from any machinery and avoid driving as the drug can cause drowsiness or sleepiness. Precautions must also be taken if consuming any other medicines, which can react in a negative manner.

The dosage of the medicine is as important as the past record of allergic reaction with any of the chemicals. An overdose may cause troubled breathing and other serious ailments. Special care must be taken when children are concerned as they are not resistant to the harmful effects of the medications. Their body also absorbs twice the amount of medicine as the adult body does, causing more harm.

Levocetirizine is a fantastic composition that aids in healing various ailments but also has numerous side-effects if the general instructions and dosage either given by the doctor or Levocetirizine dihydrochloride manufacturers on the medicine wrapper are not followed. Hence, it is suggested to follow a proper method and restricted consumption to enjoy the benefits and discard the adverse effects.