Don't You Believe It: Common Myths About Boxers 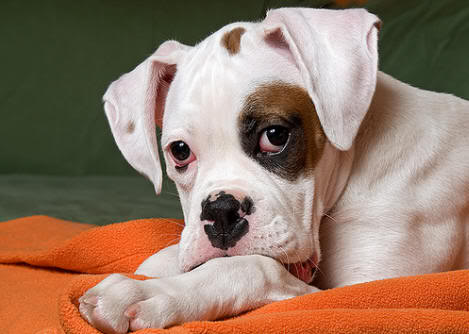 There are several breeds of dog that have a slew of myths and mysteries surrounding them, while some of them are based on folklore and superstition, most prove to be little more than just that. Unfortunately, there are some breeds that suffer more because of these myths and boxers are among them. Boxers, especially white ones, catch a lot of flak, despite being a fantastic breed for a family dog. Here are some of the most commonly believed myths about boxers.

“Boxers get their name because of the tendency to play by standing on their hind legs and “boxing” with their front paws”- While this might be a fun one to believe, it is the least likely explanation of how the breed got it’s name. The original breed of boxer came from Germany, a mix between an Old English Bulldog and the now extinct, Bullenbeisser. While the exact origins of the name are still debatable, it’s widely believed that the name boxer is just a corrupted form the German word “Boxl” which referred to a smaller breed of bullenbeissers.

White Boxers are all Deaf and untrainable

Unfortunately, white boxers are prone to deafness in one or both ears, however, this does not apply to all white boxers. Conversely, it’s not just white boxers that can be deaf, as even reds and brindles can suffer from the same hearing affliction. Even if your boxer is deaf, they are still incredible intelligent and capable dogs. With the right training a boxer can respond perfectly well to sign language, flashlights and other gestures or signals.

The problem here is that any breed of dog can be aggressive. Most who make broad sweeping claims like that have had a bad experience and are just as happy to condemn the entire breed. While some boxers, in particular those with poor training or bad owners, can be more aggressive, this can be said of any dog. Boxers as a breed are prone to a gentle disposition and are great with small children. What people might misconstrue as aggression is the fact that boxers are incredibly protective of their family which can make them bristly towards strangers.

Again, this is dependant of the individual dog and not indicative of the breed as a whole. When it comes to boxers being loud, noisy or rambunctious, the issue is twofold. The first, is that boxers are higher energy dogs, so if they don’t get the right amount of exercise, they’re prone to misbehave. The second, what most people don’t realize, is that boxers are a larger breed of dog and very strong. Due to their size and strength a boxer can get a bit clumsy when over excited. As with any dog, it comes to the matter of proper training.

Boxers are well known for being lovable, loyal, intelligent and protective. Good with both small children as well as smaller dogs, boxers make for a great addition to the family. In a 2013 study done by the AKC boxers have ranked 7th in the nation as favorite breed, for the 4th consecutive year. With their gentle disposition, high level of intelligence and playful nature, boxers have managed to rise above the myths and win their place in the hearts and homes of people the world over.