Is It Worth Regularly Cleaning Cheap Bongs? 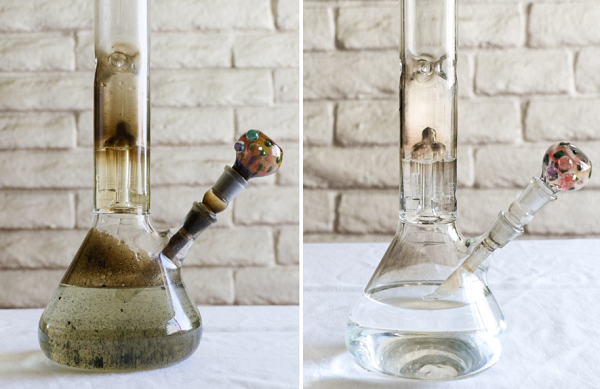 I’m talking like, really cheap bongs. The tacky acrylic ones shaped like skulls or musical instruments, that were clearly made in China and cost you about 12$ give or take. I’m not talking down on these though, cheap bongs of this kind are essential for some stoners. They’re easy to travel with without any worries of breaking them, and for the same reason they’re ideal to bring to parties since they won’t break no matter how many stumbling, drunken fools are around. Some people might consider another advantage of these little guys to be the fact that they don’t need to be cleaned. Because who really enjoys the chore of cleaning their bong right? Other people, however, sometimes think that because they’re so cheap and low quality, you should even put a slight bit more effort into keeping it clean. So which is it?
How To Clean Them
Cleaning cheap bongs like this is more or less the exact same as cleaning any other bong. There are lots of heavy duty chemical solutions dyed all sorts of vibrant colors and marketed then sold as bong cleaner which work like a charm, but 90% rubbing alcohol combined with some coarse salt and hot water does the trick just the same. The thing about cleaning out a bong with alcohol and salt though is that you need to get some seriously powerful shaking going on. The salt acts as a scrubber and rubs residues off the sides which are loosened up by the alcohol. This might not exactly occur with a small cheap plastic bong because the small amount of space inside might not let you get enough power behind the shaking. For that reason, if you do want to properly clean your little bong, you might actually prefer to try one of those cleaning solutions specifically for the task. That means you have to drop a bit of cash though, so is it worth it? A bottle of that kind of stuff is generally like thirty dollars give or take, but with a particularly small bong you can definitely get a good half dozen cleanings out of it. At the end of the day it depends how badly you want the best possible flavor out of your low end piece.