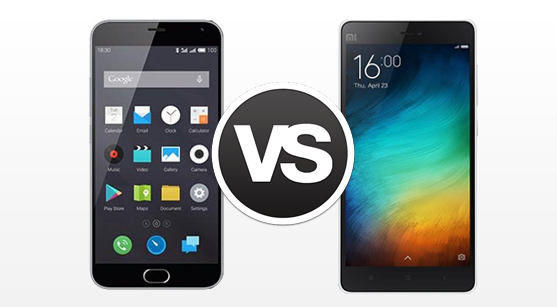 In 2015, budgetsmartphone arena has been dominated by some power-packed handsets fromXiaomi, Lenovo, Micromax, Asus, and OnePlus.Whether you’re a high-end gamer or photography enthusiast, smartphones from all these brands can cater all your needs with complete proficiency. Recently, renowned smartphone maker Xiaomi launched its Mi4i with an amazing set of specs, while another Chinese manufacturer, Meizu brought its competitorin the form of M2 Note. Both devices offer brilliant specs and come at a very competitive price point. Xiaomi has been offering some excellent smartphonessince last year, and Meizu just entered the global scenario with its alluring Note smartphones.But, if you’re shopping for a feature-rich phone at decent price, comparing their difference might prove really beneficial in making the right choice.Have a look to know more!

The design language of Xiaomi Mi4i and Meizu M2 Note is really alluring.The new Mi4i features a polycarbonate non-removable back with 7.8mm thickness and 130 grams of weight, while Meizu’s M2 Note also packs soft-touch non-removable back, but with slightly more thickness and weight. Mi4i is currently coming in white and dark grey avatar, while M2 Note will be hitting the shelves in Blue, Grey Pink, and White colors.The classic physical button featured on the front panel is also an essential highlight of this device.

In the display department, Xiaomi Mi4i and Meizu M2 Note both pack a brilliant viewing experience with their full HD displays.Both phones produce crisp and vibrant images, and can easily take gaming and media experience to a whole new level. The 5.5-inch IGZO capacitive touchscreen of M2 Note is slightly bigger than the 5-inch IPS capacitive screen of Mi4i.Its pixel density is slightly lower, but you can easily see fine details on both phones without any issues or color shifts.The display of Mi4i also packs an added layer of protection with Corning OGS glass.

Under the hood, there is a big difference between Xiaomi Mi4i and Meizu M2 Note. Xiaomi’s India specific beauty has been powered by a 64-bit octa-core Snapdragon 615 chipset clocked at 1.8Ghz with 2GB RAM, while Meizu’s M2 Note has been powered by a MediaTek MT6753 chipset clocked at a speed of 1.3Ghz with same 2GB RAM. Both phones promise to offer top-notch performance with minimal lags or glitches, but Xiaomi’s Mi4i with Snapdragon chipset and Adreno 405 GPU looks slightly stronger than its competitor with MediaTek chipset and Mali T720 GPU.

On the software front, Xiaomi Mi4i and Meizu M2 Note can be described as two updated smartphones with a smooth and clean interface. On one hand, Xiaomi’s Mi4i runs Android 5.0.2 out-of-the box with company’s MIUI 6, while on the other, Meizu’s M2 Note runs Flyme OS optimized over Android 5.0 Lollipop. Both phones feature a decent interface, and offer ideal customization support for best experience.You can also improve look and feel of the interface with added themes and wallpapers from
Xiaomi and Meizu.

Xiaomi Mi4i and Meizu M2 Note are two smartphones which pack extreme camera capabilities for photography enthusiasts. Both phones come with a 13-megapixel rear and 5-megapixel front-facing snapper for taking brilliant images under low-light and daylight conditions. Both phones come with a dual LED flash, and offer features like, HDR, geo-tagging, touch focus, panorama, and face detection. You can easily record full HD video with both devices, but M2 Note gives an added advantage by offering ability to capture videos at higher resolution of 2160 pixels. On whole, both produce extremely good and crisp images.

On the connectivity front, Xiaomi Mi4i and Meizu M2 Note pack ideal support with a massive selection of options like, 4G LTE, Wi-Fi, HSDPA, EDGE/GPRS, Bluetooth, GLONASS, and microUSB 2.0. Both dual-sim devices are equipped with a 3.5mm audio jack, but Xiaomi takes an upper place by featuring the latest Bluetooth v4.1 compared to version 4.0 of Meizu M2 Note.The experience of web browsing on both phones is extremely smooth and fluid.

In terms of power efficiency, Mi4i and M2 Note both smartphones go neck and neck. On one hand, Xiaomi’s Mi4i packs brilliant performance with its big battery of 3120mAh, while on the other, Meizu M2 Note also promises to hold sufficient amount of charge with its long-lasting battery of 3100mAh. There is small difference between the battery capacities of both devices, but you can certainly expect them to offer 34 to 35 hours of talk time on 3G network. Mi4i also supports quick charge, and can easily take up to 40% of juice in just an hour.

The price tag given to Xiaomi Mi4i and Meizu M2 Note is also a major highlightfor budget oriented buyers. In the Indian market, Mi4i is hitting the shelves at a price of Rs. 12,999 bundled with offers from Airtel and other companies, while two variants of M2 Note has been launched in china for CNY 799 (Rs. 8,250 approx.) for the 16GB model, and CNY 999 (Rs. 10,300approximately) for the 32GB model. The India specific launch for M2 Note is still awaited, but its price would definitely be lower thanMi4i.

Considering the entire package of build quality, specs, and price, Meizu M2 Note looks like a tough competitor for Xiaomi Mi4i. In the budget arena, this new brand can definitely attract potential buyers with top-notch specs and alluring design language. But Xiaomi’s brand value and customer support can give slight advantage to Mi4i.This phone comes with second generation Snapdragon 615, and can easily give improved performance without any lags or heating issues.Bothphonescan be described as an ideal choice below 15k, but if you want improved performance while playing high-end games or switching between apps, Xiaomi Mi4i will be a better option to consider. Its sleek design, light weight and compactness will not only give a great feel, but will also take your experience to a whole new level.