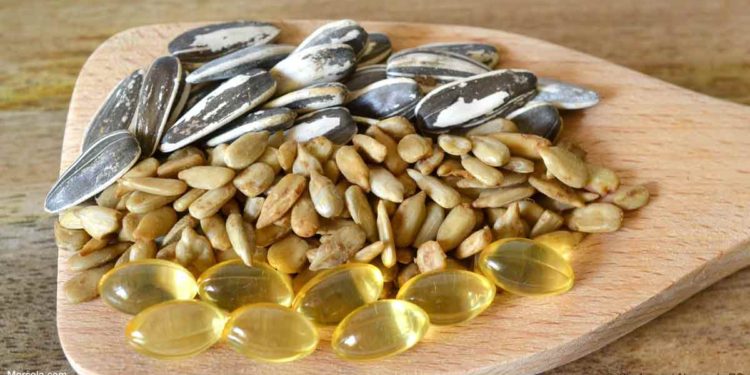 Why are people so excited about Vitamin E?

There’s a lot of intriguing research going on that’s looking into vitamin E’s ability to boost a person’s immune system, reduce the risk of heart disease, slow the progression of Alzheimer’s, and combat the effects of air pollution. It may even protect against some types of cancer. If you ask the majority of health-care providers who follow the research whether they take vitamin E, most of them would probably say yes.

What is the most exciting discovery?

That it can help prevent “bad” cholesterol (LDL) from being oxidized and getting drawn inside the walls of the arteries, which is one of the first steps in the development of atherosclerosis, or blocked arteries. In simple terms, vitamin E offers itself up to be destroyed by unstable oxygen molecules, saving healthy tissue that would otherwise be targeted.

What is killer oxygen?

When the human body produces energy, it also generates oxygen-not the stable form that we breathe, but single oxygen atoms or molecules with three oxygen atoms-negatively charged particles (called free radicals) that are very unstable and attack healthy cells. Free radicals may also be produced by smoking, toxins, and pollution. Vitamin E, which is an antioxidant, combines with free radicals, neutralizing them before they can cause further damage.

Free radicals are strongly implicated in causing cancer, and since vitamin E helps neutralize them, theoretically it could play a role. The human body has plenty of its own natural defenses against free radicals in the form of various enzyme systems, but because we now live longer and are exposed to more tissue damage, we’re at risk for greater cell damage. By taking antioxidants such as vitamins E and C, selenium, and beta-carotene, we’re more likely to protect ourselves.

How much vitamin E should a person take?

Most doctors recommend 400 I.U.’s a day. When you look at all the research, it’s sort of a common denominator: In some studies, people were given 100 I.U.’s, or 400, or even 800, but the benefits weren’t that much greater at 800 than at 400, so that is considered a safe, effective amount. One reason there’s been so much interest in vitamin E supplements is that it’s nearly impossible to get 400 I.U.’s from your diet. While there are good amounts of vitamin E in vegetable oils, nuts, and seeds, you’d have to eat about 2,000 almonds-which would contain 8,000 calories and loads of fat-to derive 400 I.U.’s.

What is the best way to take vitamin E?

It’s probably a good idea to take it along with vitamin C-there seems to be a synergistic effect between the two. The way scientist think it works is that C either protects E or helps to regenerate it so that it will hang around your system a bit longer. And the two vitamins also work on different kinds of tissues: C acts on those that are more water-soluble, like the fluids around the eye, while E protects the fat-soluble ones, like skin cells.

Does vitamin E slow down aging?

At this time there is not enough evidence to back up this claim. Adding vitamin E to a healthy lifestyle regimen may not be a bad idea. You have to put things in perspective and realize that vitamin E isn’t a magic bullet: It won’t prevent heart disease, protect you from cancer, or strengthen your immune system if you don’t make other changes. You need to eat more fruits and vegetables, cut down on saturated fats, and get out there and exercise.

Who should avoid vitamin E?

Anyone taking blood-thinning agents such as Coumadin, because vitamin E in high doses can interfere with blood clotting and increase bleeding.